The 42ITy™ project promotes the global development, distribution and adoption of the 42ITy™ platform as a next generation Data Center Service Optimization enablement platform.

The goal is to serve developers, users and the entire data center ecosystem by providing a set of shared resources to grow the adoption of 42ITy™ as the only open source, next generation Data Center Service Optimization enablement platform.

The initial 42ITy™ platform is a result of more than 3 years of R&D effort by Eaton Corporation provided to the community. While Eaton continues to be a key contributor to 42ITy™, the community is already growing. Please read the Contributor guide to find out how you can contribute.

The 42ITy™ platform allows to connect together various software components to:

The 42ITy™ software platform is a Service Oriented Architecture (SOA), made of a collection of software packages. These package provide agents (micro services) which communicate through a MOM (Message-oriented middleware), built around the ZeroMQ technology stack.

The software is divided in a set of independent components, called agent. 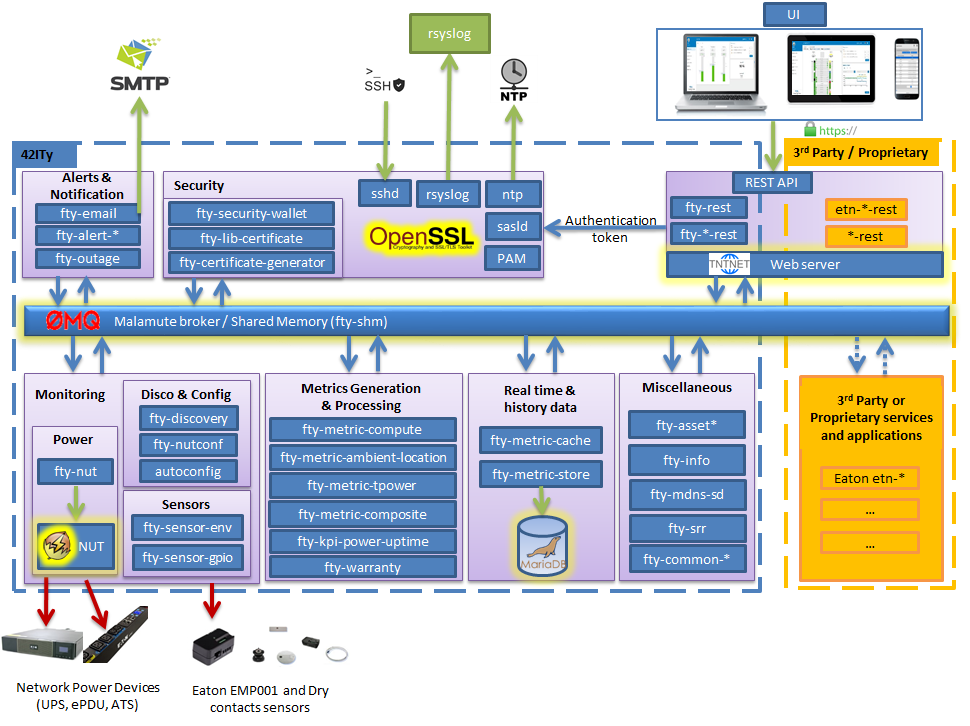 Because we expect an arbitrary number of agents to be connected together, 42ITy™ uses a central message broker called Malamute.

Malamute is built using the same ZeroMQ stack, so integrates with the code easily. The purpose of malamute is to abstract from maintaining peer-to-peer connections and to allow easy 1:N communication patterns without need to change the agent side.

At the moment there are three main patterns supported by Malamute broker:

Refer to the project fty-proto for more information.

This chapter will be completed later.

Agents communicate through buses maintained by ZeroMQ library. Buses can use several backend technologies, most notably unix and classic TCP/IP sockets. So agents can be placed on the same machine or on arbitrary number of other machines (currently out of scope). Because basic messaging using zeromq messages (zmsg) is error prone with a lot of code duplication, 42ITy™ project uses serialization library called zproto. It defines a model of message in declarative XML language and code is generated using a template language called gsl.

Generated code does provide nice C API for manipulating with messages as well as a way how to encode/decode it to/from zmsg. Thus such generated representations can be easily sent through zeromq channels.

Agents are built on top of the actor model. That means that each agent maintains its own state internally and communicate with the rest of the system by sending messages. The communication is asynchronous and agents are single threaded with the main loop. For cases where the single main loop is not enough due to performance reasons, agent can distribute workload to others using SERVICE pattern. However this is not used in current version of 42ITy™.

How to create a new agent

There are various ways to create a new 42ITy agent:

42ITy™ also exposes its data through a REST API.

How to create a new REST API mountpoint

There are tutorials, but you may also look at fty-rest and other fty-rest-* components as references.

You may fork the fty-template-rest repository.

42ITy™ foundations rely on several major opensource projects, to provide some generic core services, such as data storage, communication with devices, communication between agents, web user interface and REST API, and build added value on top of these.

Malamute is the ZeroMQ Enterprise Messaging Broker, providing all the enterprise messaging patterns in one box.

MariaDB is one of the most popular database servers in the world, made by the original developers of MySQL and guaranteed to stay open source.

NUT - Network UPS Tools is a project which provides support for a wide range of power devices, such as UPS, PDU and ATS.

Tntnet is a modular, multithreaded web application server for C++.

This chapter briefly presents the different sub-projects that forms the 42ITy™ platform. More detailed information can be found on the dedicated pages of these sub-projects.

Each of these sub-projects is available as a repository on 42ITy GitHub page, and provides a README file, with various information on its purpose, its provided services (through STREAMS) and data.

The systemd system and service manager is responsible for controlling how 42ITy™ services are started, stopped and otherwise managed. It uses an event-based and dependencies based approach to optimize how services are managed (started, stopped, reloaded).

The figure bellow illustrates the dependencies relationships for services running on 42ITy™. 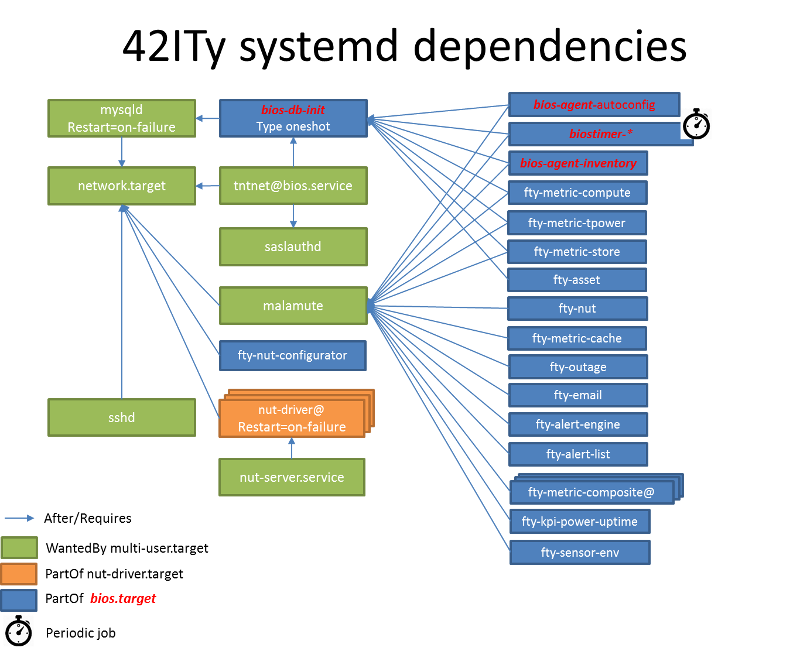 this needs refreshing and completion!

For example, here are fty-example packaging files for Debian

Note that 42ITy main focus being on Debian, the other packages integration may not be as optimal.

It’s beyond the scope of this document to describe how to create such packages. You may refer to the following documents:

As a basic example for fty-example on Debian, you may simply do:

To create a full system using 42ITy, you will need the following:

Basically, you just need to:

Tools like Multistrap or OBS may help you to arrange and automate images production using the above information.